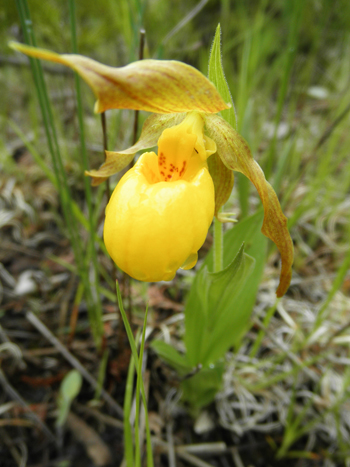 The Taimi Hoag Natural Area (THAN) is a 54.3-acre parcel (in trust) that was dedicated to conservancy in memory of former LTBB Environmental Services Department Director Taimi Lynn Hoag. This undeveloped coastal property is located along an important unbroken stretch of coastal forest along the east side of US 31, between Charlevoix and Petoskey and almost entirely is surrounded by Little Traverse Conservancy (LTC) property. The Environmental Services Program has been in charge of maintaining the trail at the THNA and completes trail maintenance annually. Susan Creek runs northwards toward Lake Michigan along the east side of the property. The creek is small, permanent with seasonal intermittent flows, carrying water from Susan Lake. Previous owners constructed several dams along the creek in decades past, and some of the rebar from those dams is still in and along the creek. The creek is monitored by LTBB

The property consists of coastal cedar swamp mixed with hardwoods such as mature trembling aspen and sugar maple. The aspen are reaching maturity and have started to die and come down. Most of the ash on the property is quickly dying from Emerald ash borer. In addition, due to the proximity to the coast of Lake Michigan, over most of the property, the soil consists of a fairly thin organic layer over cobble and limestone bedrock, which means that trees tend to develop fairly shallow root systems, and large storms and downbursts or other disturbances mean that the property is characterized by a thick tangle of live and fallen cedar, aspen, balsam poplar, balsam fir, and ash.

The wetland was most recently assessed in 2014, earning a Floristic Quality Assessment (FQA) score of 41.5 (good) and a Coefficient of Conservatism of 3.4. The Coefficient of Conservatism is based on range of habitat preference(s) and tolerance to disturbance. A higher coefficient means the plants are pickier about where they choose to live, meaning the site is more pristine. A lower coefficient is indicative of non-native or invasive species, which often grow in disturbed sites.