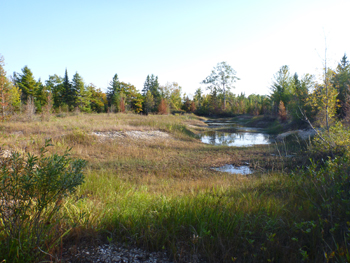 This 60-acre parcel is located near downtown Mackinaw City and is almost all wetland.

The site was vacant and undeveloped until around 1936, when excavation of gravel began on the eastern border of the property. These former gravel pits experience significant flooding from late fall through the spring. A small seasonal pond in the southwest quadrant of the site was historical used as an ice skating rink for several decades. Shortly after I-75 was constructed in the mid 1950s, highway billboards were placed along the eastern border of the site. No further development activities have occurred on the site through the purchase by LTBB in 2004. Since 2004, LTBB Environmental Services has monitored wetlands for plants, habitats, and water quality, as well as by NRD Conservation Officers as part of their regular patrols. In 2011, the Rails-to-Trails Conservancy paved the portion of the North Central State Trail (formerly the Gaylord to Mackinaw City Rail Trail) that runs through one of the easements on the property. Wooden blocks were recently (2011-2012) installed along the path to reduce vehicular off-road traffic into the sensitive wetlands along the trail, though some access is still required by utilities for access to easements and billboard maintenance. Prior to pavement, the trail consisted of crushed coal cinders, which were capped and buried.

On June 9, 2013, the property was officially declared a “Wild Area” by LTBB Tribal Council to be managed by the LTBB Natural Resource Department. Many of the plants found growing at the site are characteristic of Great Lakes coastal wetlands and shorelines. Its name “Biishkimikiing” means “wetlands, or the land or area, which is very wet” in Anishinaabemowin.

This property contains the highest quality wetlands that LTBB currently owns, in terms of the quality and diversity of natural wetland communities and habitat quality.

The Pond St. parcels also have very high quality wildlife habitat. The ponds are important habitat for a variety aquatic organisms including frogs and toads, snakes, freshwater mussels, dragonflies, and aquatic and wetland plants. Numerous deer trails cut through the property, and beaver chewed trees and sticks have been found dammed up along streams onsite. 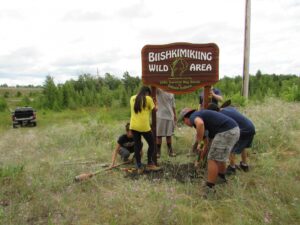 The property also plays an important role for migratory birds. Mackinaw City lies at the tip of the northernmost point of the Lower Peninsula, which is an important location along some of the major bird migration routes within North America. The Pond St. parcels are a part of a larger contiguous stretch of wetlands at the tip of Mackinaw that is large enough to be visible on aerial photography. The wetlands are an important stopping area for birds migrating through the Straits of Mackinaw on their way north to the boreal forests of Canada in the spring and fall. The birds often come down and use the property for shelter and feeding, especially during bad weather. Many warblers and water birds such as great blue herons use the property for breeding/nesting as well. A total of 39 different species of birds have been recorded on the property by LTBB.

This property is also very important for local water quality and flood protection. The Village of Mackinaw City recently purchased the adjacent parcels along the southern boundary of the LTBB Pond Street property and passed a resolution on September 6, 2012 to protect the wetland properties for “…environmental safety including but not limited to wetland and aquifer protection.” The Pond Street parcels are the last remaining piece of the large high quality wetland area that need to be formally and permanently protected, as they provide invaluable aquifer and floodwater protection services. 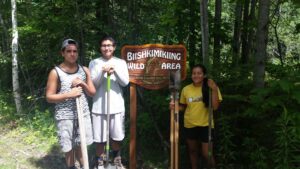 The wetland was most recently assessed in 2014, earning a Floristic Quality Assessment (FQA) score of 54.1 (good) and a Coefficient of Conservatism of 4.1. The Coefficient of Conservatism is based on range of habitat preference(s) and tolerance to disturbance. A higher coefficient means the plants are pickier about where they choose to live, meaning the site is more pristine. A lower coefficient is indicative of non-native or invasive species, which often grow in disturbed sites.